Solitude Within a City?

In true Audrey-fashion, I had a duplicitous reaction after reading this essay about Chance Encounter on the Tiber—an investigation into spontaneous non-design activations of public urban spaces. This project used the banks of Rome’s Tiber River, its walkways “essentially unused by Romans and visitors alike,” as the location for an experimental attempt to activate a public space. By placing one hundred movable red chairs on the riverside walkway, the project aimed to see how—and if—people would use the space. To take it a step further, a somewhat impromptu musical performance was added; Lisa Bielawa’s musical composition, Chance Encounter, was written “expressly for performance in transient public spaces.”

Conceptually, I love this idea. While this experiment may not have drawn the crowds hoped for, the thought that simple actions have the potential to alter a public urban space by shaping the way people will use it, is beautiful and fascinating. It speaks to the idea that sometimes we have a tendency to over-think and over-design, whereas often solutions can be simple, yet still effective.

My opposing reaction comes from my personal experience with the Tiber’s riverbank walkways. I had the fortune to be a temporary resident of Rome a few years ago, and I have a special connection to these walkways. To understand what I’m about to say, one needs to have experienced an extreme urban environment—or at least be able to conjure it up in one’s mind. Rome’s urban core is heavily populated, heavily used, heavily occupied—by residents and tourists. Rome is chock-full of public squares, and they are only devoid of masses of people in the wee hours of the night. This is a city that is not lacking in public places to congregate. Additionally, Rome is loud, and its pace is hectic. It is, by all accounts, a bustling urban city.

I used to go jogging in Rome—something that quickly identified me as not a Roman—through the historic center, toward the river, often descending the stairs to the aforementioned riverbank walkways. What I loved most about my experiences on these walkways was the key thing Chance Encounter was trying to change: the scarcity of people. I found something magical in this desolate place lying directly within and surrounded by an urban hub teeming with people. There was also something fascinating about the idea of descending to this place; conceptually it was underground. It allowed one to be anonymous, and essentially, alone—something that is never possible at the top of the stairs. It was different from going to a park or a trail or some otherwise quiet place of respite within the city. It offered a more unique experience: to be directly within the city, still able to hear the noise and see the traffic zooming by, above the river, yet be somewhat removed from it all.

To be within and surrounded by something great, yet be somehow uninvolved is an opportunity we don’t often get in an urban environment.

As I filed through the photographs of this project, I found myself smirking at the photos of the stairs being scrubbed and sprayed down—because I know why. It’s a simple fact of urban life that desolate places such as this will attract what some may term “undesirables.” The Tiber River walkways and stairs are no exception. Some locations on the riverbanks housed the homeless, and often the stairs and walkways would be littered with drug paraphernalia. Most notably, the stairs embodied pungent overtones of urine. I’ll not go so far as to say these qualities are “attractive” or “enjoyable.” But I will say that in my mind, they are part of the allure of an urban environment with any sort of grit. Perfection, cleanliness, sterility—those are better left to the suburbs.

Essentially I’d like to question the assumed definition of a successful public space being one that is used by many—particularly a place like the Tiber riverbank, which was not designed as a gathering place, but rather as a way to protect the city from flooding.

Does every public space need to be teeming with people to be considered used and useful? Or is it acceptable, and maybe even preferable, to have public spaces within an urban context that are just the opposite?

I Heart Grit, Grime, and Graffiti

I’ve always had a fondness for graffiti, and the vibrance it adds to an urban landscape.  One look through the library of photos I’ve taken as a traveler will clearly indicate that urbanity, including the grime and grit that come with it, is attractive to me.  Add that to my propensity for all things controversial, acts of defiance, and artists gone rogue, and it’s no surprise that I am one who loves graffiti.

What some may see as vandalism and defacement of property, I see as valuable additions to the visual landscape.  It’s not even about whether I “like” the actual art.  It’s more about the act—and the fact that a city awash with graffiti is, to me, a city with color.  I mean that both literally and figuratively.  In the figurative sense, it is about activity, life, participation, and a general lack of homogeneity.  It is about artists who are willing to be defiant in order to make a statement.

So when I see colorful, artful graffiti given such disregard as to be painted over with flat gray paint—something akin to what I imagine prison walls to look like—I see the transformation from life to death.  Participation and activity turned into absence.  Vibrance and color that become dull and drab, with an air of corporate cleanliness. 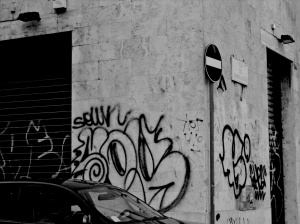 My current interest in this topic was inspired by a recent New York Times blog post about the removal of graffiti along the High Line in New York City—a process that has been both lauded and criticized.  The High Line, in many ways, is an urban-reform success story: a formerly abandoned railroad line converted to a park, offering views of the city from its elevated perch.  But the recent and impending removal of graffiti from most of the High Line’s neighboring buildings has left many feeling that a key element of the site’s history, and part of the city’s grit, has been wiped out—or painted over.

While graffiti has been around since the days of Ancient Greece and the Roman Empire in the form of inscriptions and cave paintings, modern graffiti gained prevalence during the twentieth century—much of it expressing political activism.  It is graffiti’s connection with hip-hop culture, however, and their concurrent births in New York City that bind the High Line’s graffiti to its history.  Given that the High Line was abandoned in 1980, at virtually the same time as the birth of hip-hop, the graffiti on-site provides a true visual indication of the time in which it was abandoned.  In essence, it is part of the story of what it once was.

So is it appropriate to essentially “wipe the slate clean,” particularly in a city like New York that is truly America’s most diverse and colorful city?  And a city that is as much about its grit as anything else?

The iheart project, a self-proclaimed “exploration of symbols, a love affair with representation,” painted its signature iheart symbol at the High Line in November 2008—both as an homage to the already present street art, and in protest of its rumored removal.  The process of High Line’s transformation—from graffiti-covered, abandoned railroad to pristine city park—is well chronicled and photographically documented on iheart’s website.

It kind of breaks my heart (no pun intended) to see this transformation.  I find the whole location much more beautiful, and most importantly, interesting, prior to its “cleanup.”  I see it as one thing to give the space validity within the city’s context by making it usable, but to completely alter it to the point that it has no resemblance of its former self?  I don’t get it.

Graffiti is inherently controversial: It is seen by some as art; by others as vandalism.  In all fairness, I would say it is both.  But vandalism or not, the act and the art of graffiti are inevitable elements of a city with any amount of cultural diversity.  And its acceptance—or not—is, to me, an indication of a level of respect—or disrespect—for both diversity and art.

A vibrant urban environment has personality, culture, and diversity—which can come in many forms.  Are we trying to uniformly strip our cities of this life?  Is being pristine better than acknowledging cultural differences within a city?  And a big question: How do we define art and beauty?

One person’s dream is another’s nightmare, and one person’s art is another’s trash, but I happen to be a lover of all things urban—including grit, grime, diversity, culture, and street art.