Has the abundance of work, abundance of money—general abundance—of the last several years stifled creativity and obliterated the notion of experimentation?  Has it become more about production, building, and practicality—because that’s where the money is?  This article about architect Lebbeus Woods made me consider that perhaps this “Great Recession” could be a healthy and productive part of the design cycle.  Productive for the mind, that is.  Not necessarily productive for the built environment—at least immediately.  Freed from the chains of “the man,” minds are better able to wander, to experiment, to express.

Let’s face it: there is no shortage of reality, architecturally or otherwise.  The last thing we need is more reality.  How about a little fantasy?  A little fantastical, imaginative, whacked-out creative expression?  Maybe even a little absurdity?

Much of the debate and discourse among architectural theorists has long been related to the question: What is architecture’s role in society? In Theorizing a New Agenda for Architecture, Kate Nesbitt poses four possibilities that, in my humble opinion, are worth a serious ponder: “1) architecture can be indifferent to social concerns and their expression and representation; or 2) architecture can be an affirmative actor supporting the status quo and accepting existing conditions; or 3) architecture can gently guide society in a new direction; or 4) architecture can radically criticize and remake society.”

Given that I don’t care much for societal boxes or rules, I am of course most inclined to agree with option number four.  Anything that radically criticizes and at least attempts to remake society is automatically granted some form of validity in my book.  Change requires change, period. 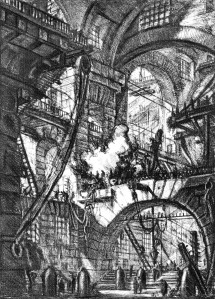 Over the past few centuries, an array of architectural characters has created work that categorically debunked the status quo with designs, drawings, and ideas that boldly expressed distaste for the usual, and contempt for the pragmatic.  The 18th century was, in some ways, a time of architectural revolt, with architect-artists such as Giovanni Battista Piranesi, Claude Nicolas Ledoux, and Étienne-Louis Boullée—who all used their work to basically say, “I don’t care what everyone else is doing, and as a matter of fact I don’t like it.  How about we shake things up a bit?  Maybe this is how it should be.” 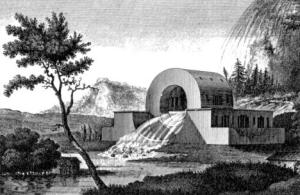 Piranesi built little over the course of his career, but he drew a lot—creating etchings of exaggerated and theatrical architecture—certainly not pragmatic, but emotion- and question-evoking. He wasn’t ignoring history, but he was certainly turning it upside down.  Ledoux and Boullée followed Piranesi by just a couple decades, and each left a body of work that could be considered more visionary than realistic—much of it never intended to be realized in the built form.  To be fair, I should note that Ledoux actually has a large roster of built projects to his credit, but this did not stop him from also designing more theoretical, visionary schemes.  All three—Piranesi, Ledoux, and Boullée—left legacies as architectural visionaries who scoffed at the standards of their times.  They were designers who were not bound by societal constraints.  Their work may not have been built, but it offered radical concepts and ideas to inspire change.  It wasn’t immediately acceptable; it required critical thought. 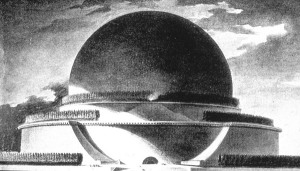 The point is, these visionaries left their marks on the architectural world not by designing what could have or should have been built.  They left their marks by doing quite the opposite.  And if Lebbeus Woods is now left to be the lone ranger—the only one who is not only willing, but also interested in, making work that evokes radical ideas, concepts, forms, and change—I believe we will be left with a barren landscape of horribly mundane architecture, and probably a generation of horribly unfulfilled architects.

Just as change leads to more change, ideas lead to more ideas.  Historically speaking, change and progression have come by way of revolution.  And revolutions typically come with much controversy, as do the revolutionaries who participate in them.  But what would our world be without revolutions, and revolutionaries for that matter?  Those who have made the biggest impact on the world, and left the biggest impressions, were not necessarily well-liked.

So now that the economy has ripped from our greedy little hands the ability to design and build hundreds more condominium towers or extravagant retail outlets, I’m calling for a moratorium on boring.  The way I see it, there are two options:  1) We can take the necessity is the mother of invention route—and design with minimal costs, minimal extravagance, and begin building with scraps and garbage (ala early Rural Studio); or 2) We can say screw it and forget about pragmatism, getting stuff built, pleasing clients (because where are they, anyway?), and being realistic.  Go wild, go nuts, draw crazy things, remake, reinvent!

I think it’s high time for another Piranesi.  Or maybe a generation of Piranesis.